The occurrence of small red moles on the skin, also known as cherry angiomas, can certainly be alarming. However, while they may seem unsightly, this particular type of mole tends to be harmless. Find out more about what red moles are and how they can be treated.

Newly discovered moles can be alarming, especially when paired with a distinctive color. Most common moles are dark brown or black, so finding red moles on the skin can be scary at first. However, the appearance of a reddish-colored mole does not mean that you have skin cancer.

Color, size, and shape distinguish a potentially cancerous mole from one that is benign. Red moles are typically benign. They are often just an indication of aging skin. 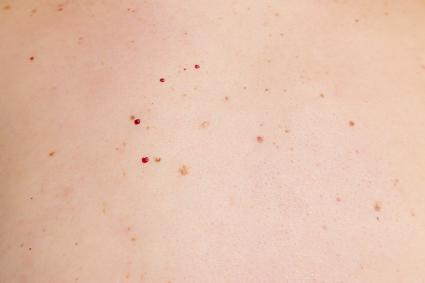 What most people refer to as red moles are actually cherry angiomas. According to MedLine Plus, cherry angiomas are common benign skin growths that consist of blood vessels. Medically known as Campbell de Morgan spots, these skin growths can appear at any location on the body, but most commonly appear on the trunk (also known as the torso). They can appear on men and women - and are most commonly seen on people over the age of 30.

Cherry angiomas vary in size and in color. The Medical News Today article, "Should I Worry About a Cherry Angiomas?" states that most cherry angiomas are a few millimeters in diameter. They begin at one-tenth of a millimeter and are generally flat, but

as the mole increases in size, the cherry angioma may be one to two millimeters in width and up to one centimeter in diameter.

The color of a cherry mole can vary, appearing bright red, blood red, or a deep shade of dark purple. The small clusters of skin capillaries surrounding the mole are what create the red papule, also known as a "dome." 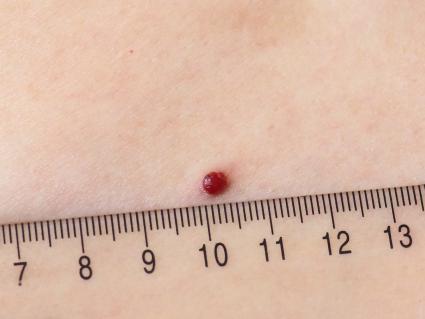 Watching for Signs of Cancer

Although most red moles are harmless, their location or size may make them undesirable. However, that doesn't mean you should stop practicing prevention. A monthly mole check will keep you aware of the size, location, and coloring of all of the moles on your body.

In order to prevent the advancement of skin cancer, you should always check your moles and have them evaluated professionally by either a dermatologist or your family doctor if they meet any of the below criteria.

Why Treat Red Moles on the Skin

Keep check of your body's moles and when in doubt, see your family doctor. Any mole that suddenly bleeds, oozes or causes pain garners prompt medical attention regardless of the color or size. If there is any concern that a mole on your skin might be cancerous, see your physician. They may suggest that you have it removed.

Even if skin cancer is not a possibility, you may want to have red moles removed from your skin. There are a number of reasons for this. Some of the most common include:

Dermatologists typically perform in-office mole removal procedures using a localized anesthetic. When doctors remove a mole, they often order a lab biopsy to confirm whether or not the mole is benign. When it comes to cherry angiomas, there are many possible removal options, such as: 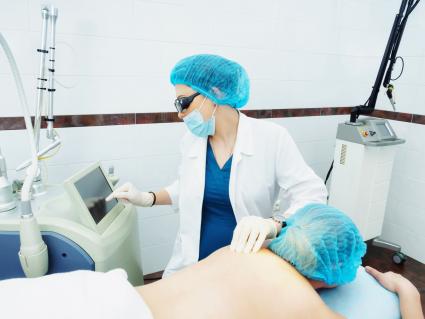 There are also natural remedies to try at home. However, it is important to note that the effectiveness of these methods can vary from person to person, and they are not proven to work. Some of the natural remedies for cherry angiomas are:

Skin can change dramatically with age. For instance, you may discover small red moles that were not there before. The best thing to do is check each mole often and speak to a medical professional when necessary.