The distinctive strep rash of scarlet fever is caused by a toxin produced by the strep bacteria that affects the skin. Some people refer to the condition as strep rash, while others call it scarlet fever rash.

The rash can be identified by the following features:

After the strep rash resolves, the skin can peel, especially on the tips of fingers and toes, the palms, and the groin.

Scarlet fever and strep throat are caused by a bacteria called group A beta-hemolytic streptococcus (Group A beta strep). Scarlet fever can occur 1 to 7 days after exposure to the bacteria, with an average of 3 days. 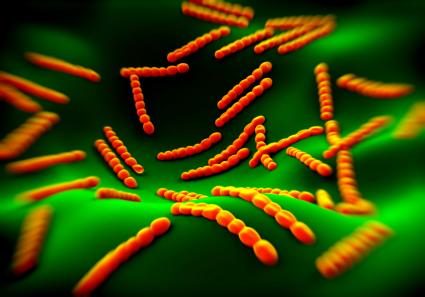 In addition to the scarlet rash, the symptoms of scarlet fever are those commonly seen with strep throat alone:

If sore throat is accompanied by coughing, sneezing, or a runny, stuffy nose usually the cause is a virus and not group A beta-strep.

When a child is taken to the doctor with a red rash accompanied by fever and a sore throat, an examination will be required to determine if he or she may have strep throat or scarlet fever. The following signs can help to make the diagnosis:

To confirm the diagnosis of strep throat or scarlet fever a doctor can do one or two lab tests:

The doctor usually starts with the rapid test and if it is positive he can prescribe treatment then.

If the rapid test is negative, a throat culture is sent to the lab to be sure. The doctor can decide whether or not to begin antibiotic treatment before the lab results come back based on:

Scarlet fever and Strep throat are curable with oral antibiotics, usually a penicillin such as Amoxicillin. Antibiotics shorten the time a child is contagious and most patients will not be contagious after 24 hours of antibiotics.

Other treatments for relief of symptoms include:

Anyone less than 20 years old should not be given aspirin because of the risk of Reyes' syndrome, a potentially fatal liver and brain disease.

If strep throat or scarlet fever is left untreated the following can occur:

Less common but serious complications include:

Scarlet fever with its accompanying distinctive scarlet strep rash is highly curable with early treatment. If your child develops a rash with sore throat and a high fever, be certain to see a doctor for treatment with antibiotics to prevent serious complications.