Bluebottle stings can be excruciating, though they're rarely dangerous. Fortunately, bluebottle sting treatment is simple (and no, you don't have to pee on them).

What Happens When a Bluebottle Stings You

Jellyfish stings occur when their tentacles come in contact with skin. This triggers the release of venom from millions of nematocytes (tiny stinging cells that cover the tentacles). Venom is injected by microscopic, barbed stingers resulting in an often painful sting.

How do you know you've been stung by a bluebottle? The symptoms of a bluebottle sting include: 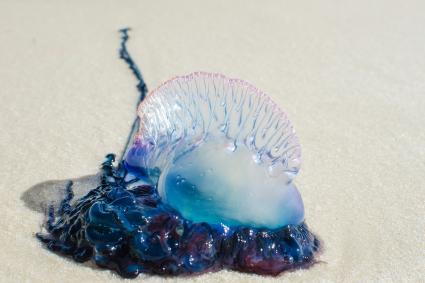 Get Out of the Water

Have the person immediately get out of the water.

Remove any tentacles that remain on the skin, either using tweezers or by hand. You might feel more comfortable using gloves, but Surf Life Saving Australia's Beachsafe website notes that venom can't usually penetrate the thicker skin of your fingers. You should therefore be okay to remove tentacles by hand if you don't have tweezers and/or gloves.

Rinse the area that has been stung with seawater rather than freshwater. Washing with water helps to wash away any stinging cells that you can't see. But using freshwater will cause the stinging cells to sting again, whereas seawater doesn't.

As soon as possible, apply hot water - ideally at a temperature of 42-45 °C - either by immersing the area in hot water, running it under a hot shower or applying a heat pack for 30-90 minutes (or until pain resolves).

If you can't immerse the area, or local pain isn't relieved after immersion, you can also apply cold packs or wrapped ice to the sting. This could be especially useful for children who might be burned by water over 40 °C.

Peeing on a Bluebottle Sting and Other Things Not to Do

Peeing on a bluebottle sting is sometimes suggested as a treatment, but that's not only gross, it also doesn't work! Other things you should not do if you or someone you know is stung by a bluebottle jellyfish include: 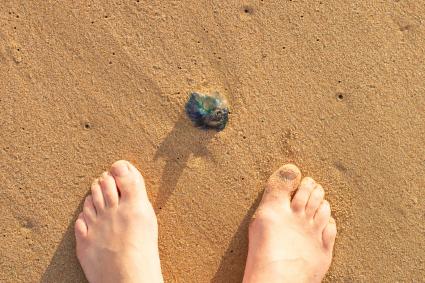 When to Seek Medical Attention After a Bluebottle Jellyfish Sting

Bluebottles are responsible for most jellyfish stings in Australia but rarely lead to hospital presentations. However, it is possible, although highly unlikely, for a bluebottle sting to cause an anaphylactic reaction. This is a severe allergic reaction like some people experience after a wasp or bee sting. Anaphylactic shock can be life-threatening. You should call an ambulance immediately on 000 (triple zero) if the person who has been stung shows any signs of a severe reaction, such as breathing difficulties or distressing chest tightness.

If it's possible that the sting was from a more dangerous type of jellyfish, such as a major box jellyfish (Chironex fleckeri), or Irukandji jellyfish (Carukia barnesi), always call an ambulance. Both types of jellyfish produce very potent venom, have multiple long tentacles, and can induce the dangerous Irukandji syndrome. Irukandji and box jellyfish stings have caused deaths in Northern Australia.

Healthdirect advises that for box jellyfish stings or any sting with Irukandji-like symptoms (such as severe backache, abdominal pain, increased heart rate, sweating, anxiety, nausea and vomiting), you should:

The common bluebottle, or Portuguese Man o'War (Physalia utriculus), can be found in marine waters in the Indian and Pacific Oceans.

Look Out for Warning Signs to Help Avoid Bluebottle Stings

If you're heading to the beach, look out for marine stinger warning signs at patrolled sites, or ask a lifeguard whether any stingers have been spotted. And remember that while bluebottle jellyfish stings can be very painful, they are rarely dangerous. Follow the recommended guidelines for bluebottle sting treatment, and always seek advice from your health professional if you have any concerns.

Comments
© 2006-2021 LoveToKnow, Corp., except where otherwise noted. All Rights Reserved.
Bluebottle Stings: Your Essential Guide to Symptoms and Treatment